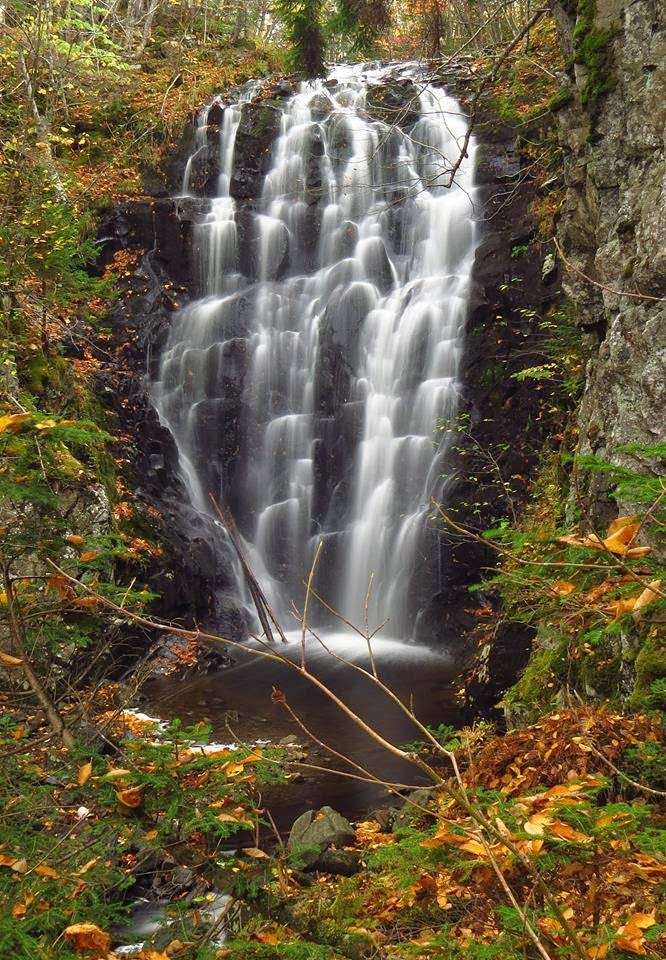 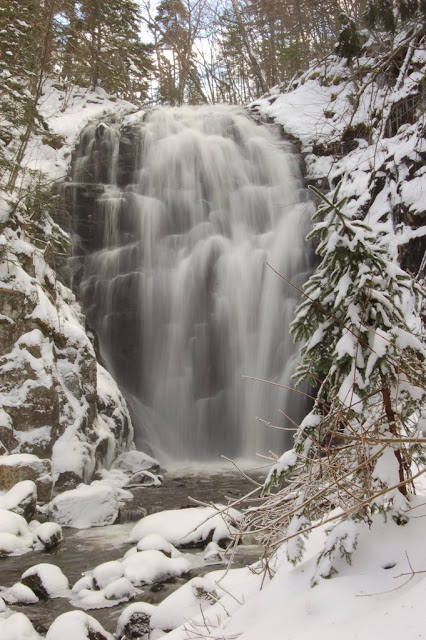 DIRECTIONS: from Kentville, take Exit12 from HWY101 onto Middle Dyke Rd. Follw this road to its conclusion, approximately 5.5km along, turning left onto the highway there, then almost immediately right again onto the continuation of Middle Dyke Rd. Follow this Rd to the village of Sheffield Mills, approximately 1.5km along, turning right onto Black Hole Rd. Follow this road up
onto the North Maountain through Sleepy Hollow, continuing along as it turns into a dirt road. When you near the falls site, there is a hard right hand ninety degree turn in the road. Park here. 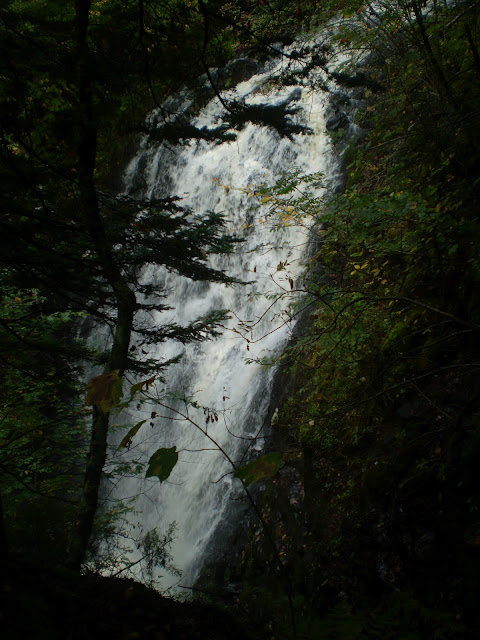 Trail Description: follow the overgrown dirt road (Old Baxters Mills Road) roughly 250m until you reach the brook. Cross over the brook, taking a small trail to the left that parallels the stream. You will arrive at the falls within a hundred meters, where there is a rope to assist your descent into the gorge close to a third of the way down. Following that you will have to pick your way down a steep trail to the base of the falls.

Alterately, if you value life and limb, you can continue downstream along the rim of the gorge to the Bay of Fundy and work your way back upstream. Tides play a factor in this approach, so take note of low tide in the Bay of Fundy before setting out. Use great caution at this site, the falls are spectacutar,
with a sheer sided gorge on either side of its narrow approach, and a fall here, in excess of 60 feet (a six-storey drop) would be catastrophic. looking down black hole harbour from the top of the falls. photo jbtech (2009)

There is a legend attached to these falls, one that involves pirate treasure! In the 1960s, an
American vessel is rumoured to have found a chest full of gold coins at the top of the falls.
Purported to be the Pirate's Bank, used by Norwegian smugglers in the early history of this
province, there are tales of strange engravings on stones, as well as strange structures along
the steep path down from the top of the falls. Nearly half of the way down along this trail, you would
encounter a small flat area which had two stones supporting a third. If one were to look through the
"window" made by these stones you would see another stone shaped like a railroad spike.
Between these stones would be found a square stone chimney the top level with
ground level. The inside of this chimney was packed with soft earth which seemed to go quite a
long way down but excavation proved imnpossible. Sometime in the late 1970's a portion of the
falls collapsed and completely buried this structure.

Furthermore, somewhere between Black Hole Harbour and Baxters Harbour, more or less
halfway along, is a large mound of earth alongside the beach. At low tide you can see a cleft in
this mound, about four feet up its height. This breach is hollowed out inside about 14" and is
filled with flat stones. Each stone is also intimated to be engraved with indecipherable markings.

More falls are found upstream, and further down the old road past Black Hole Brook one can also hike to Pineo Vault Falls, about 1km away. Cobby Irving Falls, another spectacular hike, is also nearby, has already been featured. 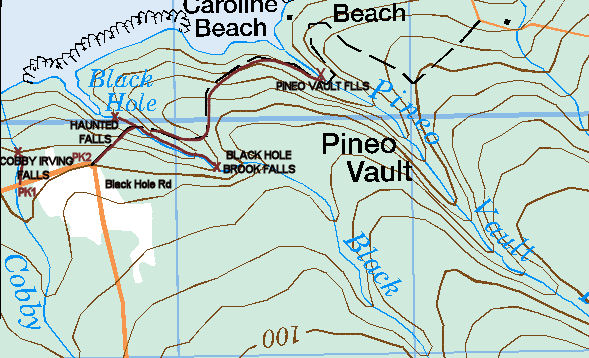